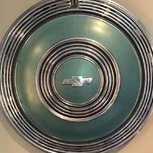 Top Posters In This Topic

I just drove it home from the shop with the 3.07 gears. I actually get to use 1st gear now, LOL. It seems to drive nice and it doesn't sit at such a high RPM on the highway. Now it is ready for the dr

After a few cruises at low speed by the beach, driving around town and some drives on the highway I’m quite happy with the 3.07 gears. I’m actually surprised at the acceleration I still have after the

Update The 70 transmission seems to be doing fine which is good for now. My 71 SS454 still has a 3.73 posi rear end. I drive a fair amount of highways where I live and like to take it